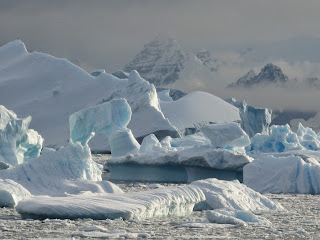 The Antarctic's Ice Paradox | The Rundown | PBS NewsHour
Posted by Richard Badalamente at 6:58 PM No comments:

From Climate Change: The Next Generation
NASA, April 16, 2014

New data from NASA's AIM spacecraft have revealed "teleconnections" in Earth's atmosphere that stretch all the way from the North Pole to the South Pole and back again, linking weather and climate more closely than simple geography would suggest.

Posted by Richard Badalamente at 3:33 PM No comments:

Addressing the Impacts of Climate Change is a Risk Management Problem

The following video of the late Stephen Schneider speaking before the Commonwealth Club is from Schneider's web site, Understanding and Solving the Climate Change Problem, Stanford University.

Schneider talks about the intersection of science and politics, and the difficulty of tackling a complex scientific subject like climate change in the charged atmosphere of today’s ideologically divided nation. He discusses such difficult questions as how uncertainty comes with the territory, what risks the changing climate poses to the global economy, and ways to approach solving the problem, especially in light of the well-funded disinformation campaign being waged by special interests.

Schneider says that policymakers should fund more research to invent our way to a cleaner future rather than betting so much on a cap-and-trade or carbon tax regime for carbon pollution. He believes the price of carbon should ultimately reflect the impact of spewing millions of tons of CO2 into the atmosphere, but recommends a realistic sequence for enacting climate policy. Schneider stresses that policy formulation is a risk management problem in which value judgements play a key role. As always, Schneider’s talk is alive with clarity and humor.
Posted by Richard Badalamente at 6:58 PM No comments:

“If the Court in Citizens United opened a door, today’s decision may well open a floodgate,” he says.
“Taken together with Citizens United, today’s holding, we fear, eviscerates our nation’s campaign finance laws, leaving a remnant incapable of dealing with the grave problems of democratic legitimacy that those laws were intended to support.”
Quid pro quo corruption is not the only danger, Breyer says. “The appearance of corruption accompanying multi-million dollar contributions can make matters worse. The public may come to believe that its efforts to communicate with its representatives or to help sway public opinion have little purpose. And a cynical public can lose interest in political participation altogether.”

“We believe,” Breyer concludes, “that today’s decision substitutes judges’ understandings of how the political process works for the understanding of Congress, fails to recognize the difference between influence resting upon public opinion and influence bought by money alone, overturns key precedent, creates serious loophole in the law, and undermines, perhaps devastates, what remains of campaign finance reform.”

“With respect, we dissent,” he adds.


And so do we, but without the qualifier.
Posted by Richard Badalamente at 8:04 PM No comments: