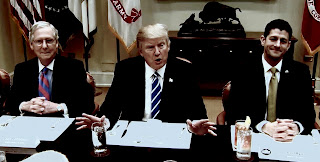 Yeah, yeah, I know. The headline is inflammatory. Exemplary of "Yellow Journalism." The difference is that in their rush to pass a "repeal and replace" healthcare bill before their "budget reconciliation" waiver expires September 30th, Republicans are demonstrating once again that they could care less about how many Americans will die because of inadequate healthcare. So, the end result of what the Republicans are doing is, in effect, killing Americans.

Republicans can use a special “budget reconciliation” procedure to advance repeal legislation with 50 votes only until the end of September. So they’re going full speed ahead and "damn the submarines," or in this case, regular order, reasoned dialogue, CBO analysis, and the health of the American people.
According to the Washinton Post, "The latest Obamacare overhaul bill gaining steam on Capitol Hill slashes health-care spending more deeply and would likely cover fewer people than a July bill that failed precisely because of such concerns. What’s different now is the sense of urgency senators are bringing to their effort to roll back the Affordable Care Act, with only a dozen days remaining before the legislative vehicle they’re using expires.”
The bill penalizes states that expanded Medicaid (read “Blue States”) giving them less money, while giving more money for states that didn’t (read “Red States”). Cut could be anywhere from 35% to 60%. Washington State could be cut over $3 billion.
The bill once again attacks the Affordable Care Act's “essential health benefits,” provision, the baseline services insurers must cover. "That means there will no longer be a rock-solid prohibition on charging higher premiums to people with preexisting medical conditions, although states would need federal waivers.”
The Graham -- Cassidy (Bill Cassidy, R-LA) bill basically puts governors in charge of doling out healthcare. As of 2016, 34 states were run by Republican governors. And Republicans control both the House and Senate in 32 states. So, we can see where Americans’ healthcare is headed if this bill passes.
Speaker Paul Ryan said he would bring the bill to the House floor without plans for a conference committee, and before a full CBO analysis. Why? Because this is all about politics. Candidate Trump picked up the Republican "repeal and replace" mantle and has lambasted republicans for not getting it done. He knows it's red meat for his base, and Republicans want the "win" for the president and the Grand Old Party. If millions of Americans lose coverage (32 million by some counts), and millions die because they lack access to healthcare, so what? They're dying anyway as a result of hurricanes and other extreme weather events that aren't due to human-caused climate change.
Posted by Richard Badalamente at 11:47 AM No comments: